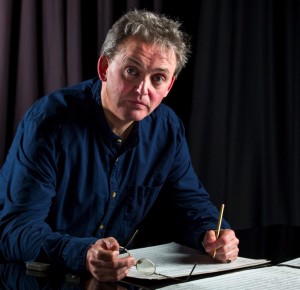 Francis Pott has acquired an international reputation over the past thirty years. His dramatic, challenging music unites a distinctive personal voice with a highly-disciplined but versatile technique rooted in a keen awareness of the past. To date his works (including a steady flow of major commissions) have been heard in concert and on radio across the UK and in over forty countries worldwide. They have been published by such major houses as Ricordi [UK], Novello [Music Sales], United Music Publishers and Oxford University Press. In December 2013 Francis signed an exclusive agreement with Edition Peters (London, Frankfurt, Leipzig and New York) which entails publication of all his future choral and organ works and of his hitherto-unpublished back-catalogue. An increasing range of his piano and chamber music is published by Composers Edition.

A highly personal harmonic voice lies at the heart of Francis’s style. His output includes many solo piano and chamber compositions, with a strong commitment also to solo song. However, he has attracted particular attention hitherto for his organ music and sacred choral works. In both he has harnessed fifteenth– and sixteenth-century polyphonic techniques to a distinctively recognisable idiom. An unusually rigorous use of motivic counterpoint, allied to a concern with the symphonic methods of the Danish composer Carl Nielsen, has found favour in Britain and also particularly in the USA, Canada, Australia, Germany and Scandinavia. Francis’s sound, difficult to pigeon-hole, has been compared in the press with composers as diverse as Nielsen, Barber, Janacek, Messiaen, Martin, Vaughan Williams, Tippett, Simpson and even Fauré, though it could be mistaken for none of these and the sheer diversity of this list is probably more indicative than any single name on it.

Francis began musical life as a chorister at New College, Oxford. He held Open Music Scholarships at Winchester College and then at Magdalene College, Cambridge, where he studied composition with Robin Holloway and Hugh Wood while also pursuing piano studies privately in London with the distinguished British artist, Hamish Milne. After six years teaching in the independent secondary sector, he became a tutor in composition for the University of Oxford, gradually expanding his remit until he was teaching for over half of its colleges. Throughout the 1990s Francis was John Bennett Lecturer in Music at St Hilda’s College, Oxford, and also a bass lay clerk in the Choir of Winchester Cathedral, under the directorship of Dr David Hill. In 2001 he relinquished these roles to become Head of London College of Music, University of West London, later leading Research across the University’s wider Faculty of Arts and acceding in 2007 to its first ever Chair in Composition. In addition to his current Professorship he holds MA and MusB degrees from the University of Cambridge, a Fellowship of London College of Music [FLCM], a PhD and a Principal Fellowship of the Higher Education Academy [PFHEA]. In September 2018 Francis voluntarily semi-retired from his university post in order to devote more time to composition.

Winner of four national and two international composition awards, in 1997 Francis received First Prize in the piano solo section of the S.S. Prokofiev Composing Competition in Moscow, for his Toccata (dedicated to his friend, the legendary French-Canadian virtuoso Marc-André Hamelin). In 2004 he was awarded Honorable Mention in the Barlow International Award for Composition (USA), placed 2nd in a worldwide field of 362 professional composers behind his friend and compatriot, Judith Bingham. In 2006 and 2011 he was a nominated finalist in the BASCA Annual Composer Awards, staged in association with the BBC. In August 1999 A Song on the End of the World, his oratorio for soloists, chorus and orchestra, was hailed in The Times as ‘thrilling music, …contemporary and original, …impressive and profoundly affecting’ , and in The Birmingham Post  as ‘a stunning première, …apocalyptic and luminous’. In 2006 his further oratorio for tenor soloist, double chorus and organ, The Cloud of Unknowing, was acclaimed by Richard Morrison in The Times:  ‘A sincere, intelligent and admirably unsensational meditation on the darkness at the heart of man.  …One sometimes writes, hyperbolically, of a performance moving one to tears. But at the end of Francis Pott’s The Cloud of Unknowing, genuine tears were shed’.

Francis’ recent output includes Word, a half-hour meditative sequence for chorus and organ which interrogates the meaning and message of the Gospels in a postmodern age, and which intersperses five poems of R.S.Thomas with verses from St John’s Prologue in the New Revised Standard Version; also a large-scale Mass for eight parts, recorded in 2011 on the Naxos label by its dedicatees, the Oxford-based chamber choir Commotio under their conductor, Matthew Berry. Concert music has included Einzige Tage, a song cycle setting German translations of Russian poems by Pasternak and Akhmatova, and a half-hour Sonata for viola and piano; these two works were released together on CD in December 2014. Recent projects also include two major works for chorus and orchestra, while current activity embraces concertos for violin and for cor anglais and further works for organ and for piano. Francis remains active as a piano soloist, accompanist and chamber partner and maintains a particular research interest in the oeuvre of the émigré Russian composer-pianist, Nikolai Medtner.

Francis Pott is married with two adult children (both following him in musical directions) and lives in a village on the outskirts of Winchester.