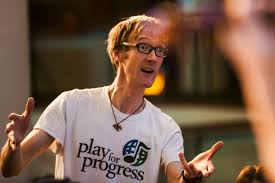 Bill writes music and literature inspired by places. He collaborates with writers, climbers, artists, and scientists.

He has a particular interest in sonic and visual structures found in nature and in the interactions between humans and the natural world. He also works as a music director and a coach. He is a keen mountaineer and climber.

Bill holds degrees in English Literature (Cambridge University) and orchestral conducting (Royal Scottish Academy of Music and Drama). He has been composing since 2012 and has been a freelance music director since 2002.

As a bass-baritone he trained with Thomas Hunt, David Lowe, and Peter Alexander Wilson and enjoyed a singing career before deciding to focus on composing, writing, and directing on a project-by-project basis. In between projects he coaches singers, conductors, composers, and writers. He lives in London.

For a 2014 commission from The King’s School, Worcester he was inspired to write a piece after watching white-necked ravens duelling mid-air near the summit of Mount Kilimanjaro: The Duel of the White-necked Ravens.

In 2016/17 he collaborated with the poet Helen Mort on an exploratory climbing expedition in East Greenland. This inspired The Singing Glacier, a piece for baroque orchestra and spoken poetry with film by Richard Jones, commissioned by The Little Baroque Company. Helen’s poetry and the project were celebrated in a publication by Hercules Press.

In 2018/19 Bill won a Finzi Scholarship from The Finzi Trust for a project to compose a piece inspired by mountain hares. The resulting composition, Timidus (from the Latin binomial for mountain hare) is for violin, cello, piano, and clarinet. The solo camping research trips also inspired a book about composing with mountain hares in the Cairngorms. The project features in a Finzi Trust podcast.

His current place-project is a piece about striations and horizons in Knoydart, Northwest Scotland. His plans for 2021 include a response to the cliffs and sea birds of the Faroe Islands and the island of Foula (Shetland Islands).

In 2019 Bill collaborated with Nashashibi/Skaer and Olivia Ray to produce a sound-track for the film Lamb, part of the Future Sun exhibition at S.M.A.K Gallery, Ghent.  He has also composed for Sands Films Studios, London.

Bill was Music Director for The Royal Ballet’s productions of  Elizabeth at the Linbury Theatre in 2016 and at the Barbican Theatre in 2018. He is Music Director of Farnborough Symphony Orchestra and Imperial College Sinfonietta, and he guest conducts widely. In recent years Farnborough Symphony Orchestra has performed works by composers including David Matthews and Charlotte Bray and has launched the FSO Young Composer Competition. Imperial College Sinfonietta champions innovative programming and performing layouts.

As a tutor Bill directs courses for Lacock Choral Courses, Benslow Music and Jackdaws Music Education Trust. He has a busy private coaching practice. An accomplished sight-reader at the piano, he coaches opera singers, conductors, and composers and also advises young writers. He is a trustee of the Elgar Foundation.