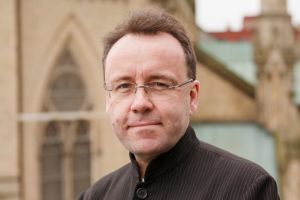 David Briggs is an internationally renowned organist whose performances are acclaimed for their musicality, virtuosity, and ability to excite and engage audiences of all ages. With an extensive repertoire spanning five centuries, he is known across the globe for his brilliant organ transcriptions of symphonic music by composers such as Mahler, Schubert, Tchaikovsky, Elgar, Bruckner, Ravel, and Bach. Fascinated by the art of Improvisation since a child, David also frequently performs improvisations to silent films such as Phantom of the Opera, Hunchback of Notre-Dame, Nosferatu, Jeanne d’Arc, Metropolis, as well as a variety of Charlie Chaplin films.

At the age of 17, David obtained his FRCO (Fellow of the Royal College of Organists) diploma, winning all the prizes and the Silver Medal of the Worshipful Company of Musicians. From 1981-84 he was the Organ Scholar at King’s College, Cambridge University, during which time he studied organ with Jean Langlais in Paris. The first British winner of the Tournemire Prize at the St Albans International Improvisation Competition, he also won the first prize in the International Improvisation Competition at Paisley. Subsequently David held positions at Hereford, Truro and Gloucester Cathedrals. He was Artist-in-Residence at St James Cathedral, Toronto and  is currently Artist-in-Residence at the Cathedral of St John the Divine, New York City.David’s schedule includes more than 60 concerts a year, spanning several continents. Deeply committed to making organ music vibrant for future generations, he enjoys giving pre-concert lectures designed to make organ music more accessible to audiences. In addition, he teaches at Cambridge (UK), frequently serves on international organ competition juries, and gives masterclasses at colleges and conservatories across the U.S. and Europe.

David Briggs is also a prolific composer and his works range from full scale oratorios to works for solo instruments. He has recorded a DVD, and 30 CDs, many of which include his own compositions and transcriptions.